Why do we do the things we do?

What's with the 'naked at work' dream?

Sigmund Freud's attempt to answer these questions established his reputation as the father of psychoanalysis.

Freud comes with his trademark cigar and perhaps his explanations of human behaviour relied too heavily on sex. Either way, he was either a genius or somewhat a randy fellow.

We think that he was likely both. Way to go, Freud.

We love Freud and his prodigious works. Here are some key quotes:

No one who, like me, conjures up the most evil of those half-tamed demons that inhabit the human breast, and seeks to wrestle with them, can expect to come through the struggle unscathed.

The great question that has never been answered, and which I have not yet been able to answer, despite my thirty years of research into the feminine soul, is “What does a woman want?”

If one wishes to form a true estimate of the full grandeur of religion, one must keep in mind what it undertakes to do for men. It gives them information about the source and origin of the universe, it assures them of protection and final happiness amid the changing vicissitudes of life, and it guides their thoughts and motions by means of precepts which are backed by the whole force of its authority.

Religion is an illusion and it derives its strength from the fact that it falls in with our instinctual desires.

Devout believers are safeguarded in a high degree against the risk of certain neurotic illnesses; their acceptance of the universal neurosis spares them the task of constructing a personal one.

At bottom God is nothing more than an exalted father.

In the long run, nothing can withstand reason and experience, and the contradiction religion offers to both is palpable.

Where id is, there shall ego be.

The ego is not master in its own house.

SIGMUND FREUD, A Difficulty in the Path of Psycho-Analysis

The sexual life of adult women is a “dark continent” for psychology.

When inspiration does not come to me, I go halfway to meet it.

Thinking is an experimental dealing with small quantities of energy, just as a general moves miniature figures over a map before setting his troops in action.

Words have a magical power. They can bring either the greatest happiness or deepest despair; they can transfer knowledge from teacher to student; words enable the orator to sway his audience and dictate its decisions. Words are capable of arousing the strongest emotions and prompting all men's actions.

Being entirely honest with oneself is a good exercise.

He that has eyes to see and ears to hear may convince himself that no mortal can keep a secret. If his lips are silent, he chatters with his fingertips; betrayal oozes out of him at every pore.

One feels inclined to say that the intention that man should be “happy” is not included in the plan of “Creation.”

I cannot think of any need in childhood as strong as the need for a father’s protection.

America is the most grandiose experiment the world has seen ... but, I am afraid, it is not going to be a success.

SIGMUND FREUD, Ronald W. Clark's Freud: The Man and His Cause

If a man has been his mother’s undisputed darling he retains throughout life the triumphant feeling, the confidence in success, which not seldom brings actual success along with it.

There is a psychological technique which makes it possible to interpret dreams, and ... if that procedure is employed, every dream reveals itself as a psychical structure which has a meaning and which can be inserted at an assignable point in the mental activities of waking life.

Sometimes a cigar is just a cigar.

SIGMUND FREUD, And I Quote

A child in its greed for love does not enjoy having to share the affection of its parents with its brothers and sisters; and it notices that the whole of their affection is lavished upon it once more whenever it arouses their anxiety by falling ill. It has now discovered a means of enticing out its parents' love and will make use of that means as soon as it has the necessary psychical material at its disposal for producing an illness.

The first request of civilization ... is that of justice.

To be sure, the ancient belief that the dream reveals the future is not entirely devoid of truth. By representing to us a wish as fulfilled the dream certainly leads us into the future; but this future, taken by the dreamer as present, has been formed into the likeness of that past by the indestructible wish.

What progress we are making. In the Middle Ages they would have burned me. Now they are content with burning my books.

Beauty has no obvious use; nor is there any clear cultural necessity for it. Yet civilization could not do without it.

Immorality, no less than morality, has at all times found support in religion.

The virtuous man contents himself with dreaming that which the wicked man does in actual life.

We are so constituted that we can gain intense pleasure only from the contrast, and only very little from the condition itself.

The behavior of a human being in sexual matters is often a prototype for the whole of his other modes of reaction in life.

SIGMUND FREUD, Sexuality and the Psychology of Love 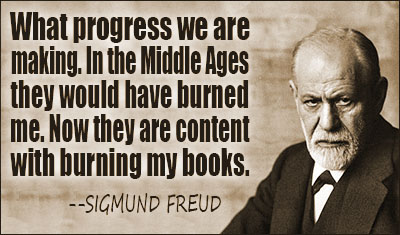 As everyone knows, the ancients before Aristotle did not consider the dream a product of the dreaming mind, but a divine inspiration, and in ancient times the two antagonistic streams, which one finds throughout in the estimates of dream life, were already noticeable. They distinguished between true and valuable dreams, sent to the dreamer to warn him or to foretell the future, and vain, fraudulent, and empty dreams, the object of which was to misguide or lead him to destruction.

I like to avoid concessions to faint-heartedness. One can never tell where that road may lead one; one gives way first in words, and then little by little in substance too.

SIGMUND FREUD, Group Psychology and the Analysis of the Ego

Dreams are the royal road to the unconscious.

These action figures that Accoutrements produced are simply SPLENDID and quite often ludicrous.

If you're looking for a unique gift, or the action figure collection that has it all and then some, then, well, you've found exactly where you need to be...